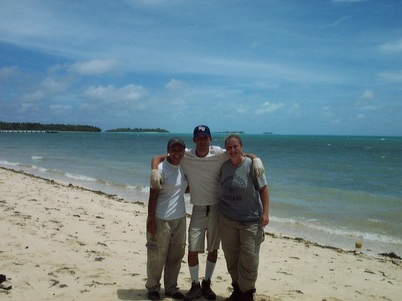 Ann Marie Gawel, Chris Carroll and Rebecca on the Belau atoll of Ngcheangel.
Field work is an adventure. It can be exciting, tiring, awe-inspiring, overwhelming, dangerous, breath-taking, miserable, and sublime all in one day. In the best and worst of times, we're doing what we love and sharing with generous souls from around the world. We are indebted to the country of Palau, to Palauans, and all of the wonderful people who have joined us in the field and learned about creatures great and small. Well, mostly small. Very small. Tiiiiiiny. 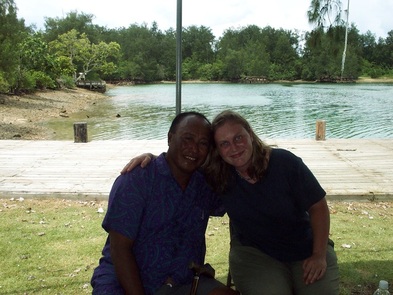 Bena and Rebecca at a community picnic to celebrate conservation programs on the island of Beliliou in Belau.
Mr. Belhaim "Bena" Sakuma, Director of the non-profit Belau Cares, Inc., has been generously giving his time, expertise, support, and friendship to our team since 2003. He is a skilled navigator, waterman, and community leader who was part of the group pushing for Belau's Nuclear-Free Constitution. This Constitution was the first of its kind in the world and was finally achieved in 1981.

One critical characteristic to any person working out in nature, including Bena, is a sense of humor. Team Snail is happy to keep him laughing, e.g. with our sea snake encounters on remote Belau islands. 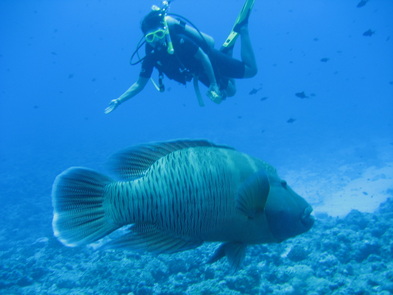 Ann Marie communing with a spectacular maml (napoleon wrasse) near Blue Corner in Belau. Photo: D. Mulroney
Ann Marie was part of the very first team of the Belau Land Snail Project. She worked on the team in 2003 and 2007. She earned a B.S. from University of Chicago finished her Master's at University of Guam. She then worked for the U.S. Fish and Wildlife Service in Honolulu, Hawaii and in Guam. Ann Marie is an expert diver and paddler who grew up on the islands of Pohnpei (Federated States of Microensia) and Guam (USA). She has survived six typhoons.

Ann Marie is now a Ph.D. candidate in the Haldre Rogers Lab at Iowa State University (Department of Ecology, Evolution, and Organismal Biology). 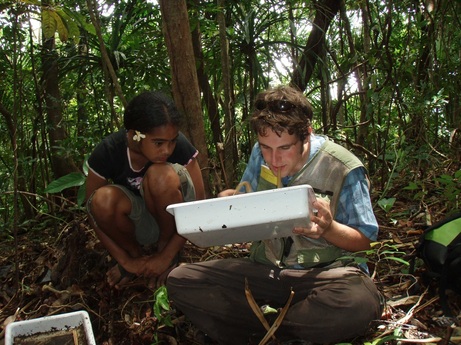 Jesse in Belau showing Jaydee Masahiro some leaf litter invertebrates. Photo: Larry DeBord
Jesse worked in Belau with Team Snail in 2005 and 2007, and continued island hopping with Rebecca in the Federated States of Micronesia in 2005. He also went on to work on arthropods with Entomologist and Curator Alan Olsen at the Belau National Museum, and began some of his own projects on these little-known invertebrates. Jesse earned his B.A. from Colgate University. He has worked in Volcanoes National Park (with the USGS), at the Field Museum of Natural History (with Corrie Moreau), and on Barro Colorado island (a research station in the middle of the Panama Canal), helping out with a variety of projects related to ant community ecology. He also worked in the Dept. of Biology with Mike Kaspari's lab at the University of Oklahoma. Jesse is a gifted singer/songwriter and made our evenings sorting snails and cooking dinner a whole lot more fun. 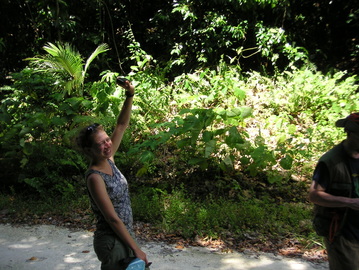 Rachael diligently trying to get a GPS reading through the canopy.
Rachael came to Belau to work on land snails in 2005, bringing with her an expertise in bird field studies. She earned her B.S. in Biology from Cornell University, and later became a Ph.D. student in the Costa Lab at U.C. Santa Cruz. Her research involves trying to understand how marine birds' non-breeding season influences the summer breeding season and survivorship. Rachael has worked in some of the most remote and climatically punishing corners of the world, including Greenland and the Bering Sea. She has also been part of a research team in Antarctica where she studied the foraging ecology of chinstrap and gentoo penguins. In contrast, Belau was. . . hot!

Rachel is now an Assistant Professor at Oregon State University. 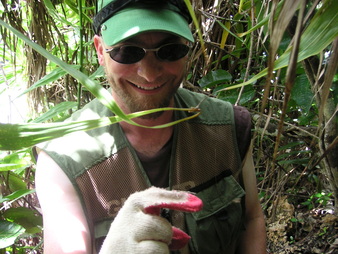 Ric befriending an invertebrate in Belau.
Ric came to work on land snails in Belau with Team Snail Belau in 2005. A lifelong snailophile (gastropodite?), Ric Brewer is the past coordinator for the North American Species Survival Plan for Partula administered by the Association of Zoos & Aquariums, which coordinated efforts for the captive breeding of this critically endangered Tahitian species of tree snail. He worked for 13 years as communications manager for Seattle's Woodland Park Zoo.

In 2012, Ric took his interest in snails in another direction and is currently working to build the only escargot farm operating in the United States, located on the Olympic Peninsula in Washington state. The farm specializes in sustainably raised escargot for restaurant wholesale. For more information, visit its website at www.littlegrayfarms.com 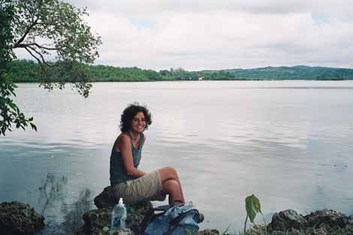 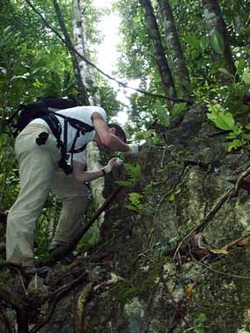 Chris on a limestone cliff collecting land snails. Photo: R. Rundell
Chris was part of the inaugural Team Snail Belau in 2003. A native of Wisconsin, Belau was a big change climate-wise, but he was a great part of the team. He earned his BS from the University of Chicago, and then went on to pursue a medical career as a medical officer in the U.S. Navy. He graduated from medical school and is now doing his residency at the Mayfield Clinic/University of Cincinnati Department of Neurosurgery. He might someday be a medical neurosurgeon stationed in Guam. 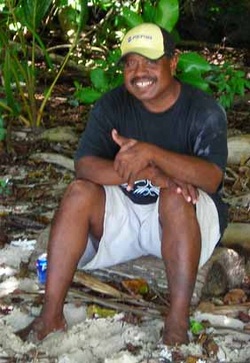 Digon Ngirkelau worked with us and our snail boat in 2007, through Bena Sakuma. Digon has an internal navigator and tide calculator for the whole of the Belau archipelago, and got us safely in and out of some tight spots, rough seas, and bad weather. As if that weren't enough, he's also a great snailer. The field season wouldn't have been the same without him.
Top: Rebecca and Ann Marie waiting out the rain in our boat. Photo: D. Mulroney, from Soft Coral Arch.