The Western Pacific Islands of Belau (Republic of Palau) 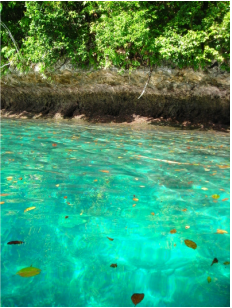 Belau is a group of about 586 islands in the western Pacific comprising 16 states within an independent republic: the Republic of Palau. It is considered part of the Caroline Islands, which is part of a vast expanse of ocean and thousands of tiny islands collectively known as Micronesia. The Republic of Palau has been home to Belauans for a very long time, but more recently has had a complex colonization history. The Republic of Palau gained its independence in 1994, but prior to this Belau made international news for a variety of reasons, including the achievement of the world's first nuclear-free constitution in 1981. In the past decade, the Republic of Palau has made groundbreaking decisions regarding the protection of sharks and coastal habitats, both of which are vital for the future of this beautiful and important island nation.

We are privileged to be able to conduct our research in Belau, which has the largest tract of "pristine" lowland rainforest in Micronesia. Our aim is to not only promote the immense (and indeed, priceless) value of Belau's biological diversity, but also to support Belau's own scientific, educational, and conservation efforts. To this end, we work closely with the states of Belau, local citizens, and non-profit groups such as the Palau Conservation Society (PCS). If you are inspired to support conservation and education in this remote and spectacular part of the world, please consider visiting or making a donation to the Palau Conservation Society. Your dollars will go far and will be used locally for critical programs.